From the Army to Australia

Leaving the Armed Forces is never a straightforward decision, especially if you have spent most of your life in the field. But if and when the time comes that you decide to make the change, the thought can seem overwhelming. Where will you live? How will you adapt to the civilian lifestyle? And most importantly: how will you earn a living now?

These considerations alone are enough to put anyone off making the transition to a ‘civvy’ lifestyle, but there is help out there. The Armed Forces themselves offer an extensive range of services, from re-training to help with housing, but sometimes that isn’t enough. And navigating the countless job boards out there can be a daunting task.

These problems are just some of the ones that faced Dave Ramsey after he decided to leave the Forces following 22 years of service. An experienced vehicle mechanic and Head of Inspections Department, he found that the average civilian employment agency didn’t know how to sell his skills to the right employer. Lacking the knowledge and understanding that can only be acquired through serving in the forces, Ramsey recalls of his experience, “The feedback I got from employers was that they didn’t understand what I could bring to the job.”

There is perhaps a slightly negative perception of those who have served in the Armed Forces, with employers potentially ruling them out as unskilled and not experienced enough for certain jobs. This is where OppO Recruitment comes in. Set up by an ex-soldier, Kayam Iqbal, it’s designed to help ex-forces members re-adjust to civilian life and find a new career, by offering CV advice, courses and job opportunities that match the skills acquired in the forces. Ramsey applied to OppO Recruitment four days after the website launched, and was highly impressed with the service provided. “The support I received from OppO has been much more helpful than anything I had from CTP (the Career Transition Partnership)”.

It was through OppO that Ramsey heard about a job opportunity in Australia with Bis Industries. Working with the world’s biggest mining and resource companies, Bis process, handle, haul and support millions of tons of materials across Australia. With his background in vehicle mechanics and experience managing teams, the role seemed perfect for him. 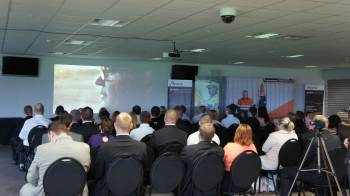 Leaving the country to emigrate to Australia may seem like a drastic change, but for Ramsey and his family it seems like a logical choice. “I love my country, but there’s not a lot here anymore. I want to move to Australia: it’s the land of opportunity.”
The prospect of relocating to the other side of the world doesn’t concern Ramsey’s wife either. “It will be a big move, but we’re used to it coming from an army background”, she says. “We want to give our kids the best life possible, and Australia is the best place for that”.

Ramsey adds, “You’re only ever a Skype phone call away from friends and family.”

For the Ramsey’s, the option of moving seems clear. And although moving abroad isn’t the best option for everyone, the jobs available on the OppO Recruitment website are incredibly varied – from engineering to hospitality – meaning there is guaranteed to be something for everyone. Alongside that, the help and advice provided ensure that ex-forces members are supported through every step of their employment journey.